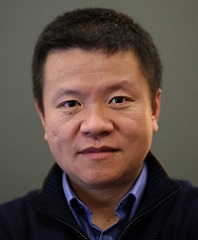 Dr. Ning Zheng is a Professor in the Department of Pharmacology in the University of Washington School of Medicine and a Howard Hughes Medical Institute Investigator. He obtained his PhD in 1997 from University of Texas Southwestern Medical Center at Dallas and did his postdoctoral studies at Memorial Sloan-Kettering Cancer Center in New York City, where he published two seminal studies on the atomic structures of two prototypical human ubiquitin ligase complexes. He has since been a leading scientist in the fields of structural biology and protein ubiquitination.

As an experimental structural biologist, Dr. Ning Zheng’s research focuses on the molecular and structural mechanisms by which protein-protein interactions control eukaryotic biology and human diseases. For many years, research in his laboratory has made major contributions to the structural and functional analyses of the cullin-RING superfamily of ubiquitin ligase machinery, which has been implicated in regulating diverse cellular functions, including but not limited to, signal transduction, cell cycle, transcriptional control, and DNA repair.

His recent studies have made major impact to several additional areas of life sciences, including protein degradation, plant hormone signaling, circadian clock regulation, chromatin modification, and structure-function of ion channels and transporters. Based on his seminal studies of the perception mechanism of the plant hormone auxin, he introduced, for the first time, the concept of “molecular glue”, which explains the mechanisms by which small molecules promote protein-protein interactions by complementing protein interfaces. This concept has now been applied to the discovery and development of novel therapeutic compounds that induce targeted protein degradation.

Dr. Ning Zheng has recently co-founded two start-up companies, which are actively developing new strategies for discovering “molecular glue” compounds that can promote the ubiquitination and degradation of disease-causing targets, which are conventionally considered undruggable. His own laboratory is also actively pursuing academic drug discovery programs that are aimed at tackling challenging human diseases, such as cancers and neurodegenerative disorders.

After joining the faculty of Pharmacology at the University of Washington, Dr. Ning Zheng received the Pew Scholar Award and Burroughs Welcome Investigator award in Pathogenesis of Infectious Diseases. He subsequently became a Howard Hughes Medical Institute Investigator in 2008 and was promoted to Professor in 2012. He was elected as a Fellow of American Association for the Advancement of Science in 2015 and the Washington State Academy of Science Member in 2020.